The Bipartisan Budget Act of 2015 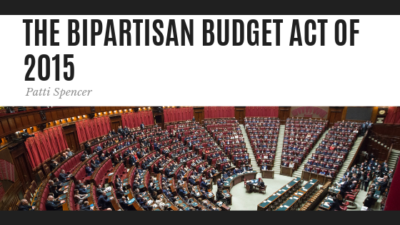 President Obama, Nov. 2, signed into law the Bipartisan Budget Act of 2015, a two-year budget deal. The legislation raises the federal debt limit and is paid for in part by provisions eliminating two Social Security retirement benefit claiming strategies, a provision to prevent a significant increase in Medicare Part B premiums for some, and provisions that will make it easier for the Internal Revenue Service to audit large partnerships.

The strategy for a married couple to “file and suspend” involves one spouse filing an application for retirement benefits when he or she reaches full retirement age and immediately requesting that benefits be suspended, allowing his or her eligible spouse to file for spousal benefits. The file-and-suspend strategy has been most commonly used when one spouse has much lower lifetime earnings, and thus will receive a higher retirement benefit based on his or her spouse’s earnings record rather than on his or her own earnings record.

Under the new law if an individual chooses to suspend retirement benefits, neither the individual nor his or her spouse can receive spousal benefits during the suspension period. The effective date is six months from enactment, so there is still time for some folks to utilize this claims strategy.

To stop this, the new legislation sets a new 2016 Part B premium of $120 for certain beneficiaries not protected by the “hold harmless” provision. This figure is the amount the premium would be if the increase was spread among all beneficiaries. These beneficiaries will pay an additional $3 in monthly Part B premiums until the shortfall is made up.

The House summary of the Act explains:

“The provision would clarify that Congress did not intend for the family partnership rules to provide an alternative test for whether a person is a partner in a partnership. The determination of whether the owner of a capital interest is a partner would be made under the generally applicable rules defining a partnership and a partner. In addition, the family partnership rules would be clarified to provide that a person is treated as a partner in a partnership in which capital is a material income—producing factor whether such interest was obtained by purchase or gift and regardless of whether such interest was acquired from a family member. The rule, therefore, is a general rule about who should be recognized as a partner.”