Pulpit Freedom on Sunday vs. IRS on Tax-exempt Status

The Alliance Defending Freedom is pushing a project it calls “Pulpit Freedom Sunday.” The event has taken place every year since 2008. On October 7, which is designated “Pulpit Freedom Sunday”, pastors across the country are encouraged to “preach sermons that will talk about the candidates running for office” and then “make a specific recommendation.”… Read More

When is Charity Exempt from Paying Property Taxes? 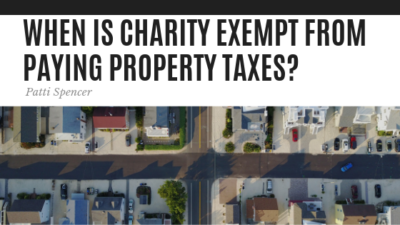 Property tax exemption for charities has become a hot topic. In Lancaster City more than 25% of the total value of the assessed property is exempt. Across the country, political subdivisions are being squeezed by the economic meltdown. Tax revenues are shrinking, and the demand and cost for services from the municipalities are ever increasing.… Read More

Does Trump’s Proposed Repeal of the Estate Tax Include Carry-Over Basis? 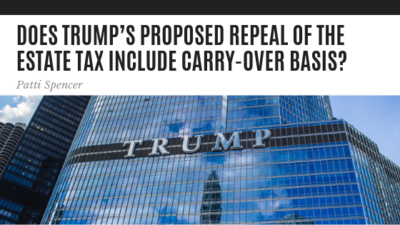 According to Fortune, if the estate tax is repealed, the government won’t even feel it. The 2017 exemption is $5.49 million. The U.S. Census bureau estimates 2.7 million people will die in 2017, but only 11,000 of them will need to file estate tax returns and only about 5,200 will actually have to pay any… Read More

On Wednesday, May 17, 2000, Pennsylvania Senate Bill 2  was signed into law by Governor Ridge. The new law is 90 pages long.  We’re going to look at about three pages of it. Effective for estates of decedents dying June 30, 2000, there are new rates and new exclusions. To review, the Pennsylvania inheritance tax… Read More

Tax Exemptions for Nonprofits: Income, Property or Both?

Exemptions from tax for non-profits: should an income exemption be enough? Non-profit organizations that meet IRS guidelines are exempt from paying income tax. The tax policy behind the exemption is that these types of organizations benefit the community and therefore reduce the burden on government. A similar policy is behind giving individuals a charitable deduction… Read More

Did you know that in President Obama’s budget proposal for fiscal 2014 released in April includes a tax increase for formerly tax-free municipal bond interest? First, some background: Municipal bonds (munis) are debt obligations issued by government entities. When you buy a municipal bond, you are loaning money to the issuer in exchange for a… Read More

Division of Estate Among the Children

Experience shows that the biggest liquidity problem is not paying estate and inheritance taxes – it is equalizing the inheritance among the family members. Business is very difficult, if not impossible, to divide equitably. Many business owners ignore this problem. They leave behind them a legacy of hard feelings and bitterness. Therefore, for the sake… Read More

The IRS has hit the estate of former Detroit Pistons owner, William Davidson, with a $2 Billion tax bill. Yes, that’s a “B”, not an “M” — $2 Billion. William Morse “Bill” Davidson, who died in March 2009 at age 86, was President, Chairman and CEO of Guardian Industries, one of the world’s largest manufacturers… Read More

Benefit of Naming a Charity as Beneficiary of Your IRA

If you want to leave something to charity when you pass away and you have a traditional IRA, naming a charity as an IRA beneficiary is an excellent strategy. Under current tax law, your IRA balance will be included in your estate for federal estate tax purposes. If you pass away with a taxable estate… Read More