Pulpit Freedom on Sunday vs. IRS on Tax-exempt Status 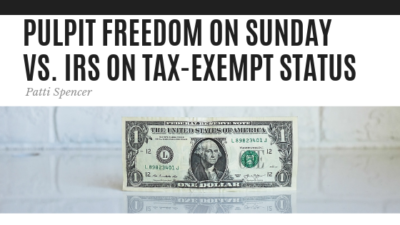 The Alliance Defending Freedom is pushing a project it calls “Pulpit Freedom Sunday.” The event has taken place every year since 2008. On October 7, which is designated “Pulpit Freedom Sunday”, pastors across the country are encouraged to “preach sermons that will talk about the candidates running for office” and then “make a specific recommendation.” The sermons will be recorded and sent to the IRS.

“The purpose is to make sure that the pastor — and not the IRS — decides what is said from the pulpit,” Erik Stanley, senior legal counsel for the group, told FoxNews.com. “It is a head-on constitutional challenge.”

Give me a break. Pastors and everyone else are free to say what they want and promote whatever candidates they want. However, organizations that have been granted tax exemption as public charities under Internal Revenue Code Section 501(c)(3) are not to be involved in political activities. Isn’t that just common sense?

To be tax-exempt under section 501(c)(3) of the Internal Revenue Code, an organization must be organized and operated exclusively for exempt purposes set forth in section 501(c)(3), and none of its earnings may inure to any private shareholder or individual. In addition, it may not be an action organization, i.e., it may not attempt to influence legislation as a substantial part of its activities and it may not participate in any campaign activity for or against political candidates.

Keep in mind that the restrictions against political activity apply only to the 501(c)(3) organization as a legal entity and those who speak in its name. An officer or director may freely make partisan statements as an individual, so long as the speaker makes it clear that he or she is not speaking on behalf of the organization.

According to the IRS, 501(c)(3) organizations are “absolutely prohibited from directly or indirectly participating in, or intervening in, any political campaign on behalf of (or in opposition to) any candidate for elective public office. Violation of this prohibition may result in denial or revocation of tax-exempt status and the imposition of certain excise tax.”

Oh really? I thought the 501(c)(3) exemption was for charities. Its exemptions apply to corporations, and any community chest, fund, cooperating association or foundation, organized and operated exclusively for religious, charitable, scientific, testing for public safety, literary, or educational purposes, to foster national or international amateur sports competition, to promote the arts, or for the prevention of cruelty to children or animals.

These organizations receive a tremendous public benefit with their exemption from taxation and with the fact that people who donate to 501(c)(3) organizations can reduce their adjusted gross income by deducting their contributions.

Political contributions are not deductible. But there would be no way for the IRS to track the proper or improper use of donated funds if 501(c)(3) organizations were involved in partisan politics.

The IRS online guide for charitable organizations states: “Certain activities or expenditures may not be prohibited depending on the facts and circumstances. For example, certain voter education activities (including presenting public forums and publishing voter education guides) conducted in a non-partisan manner do not constitute prohibited political campaign activity. In addition, other activities intended to encourage people to participate in the electoral process, such as voter registration and get-out-the-vote drives, would not be prohibited political campaign activity if conducted in a non-partisan manner.”

“On the other hand, voter education or registration activities with evidence of bias that (a) would favor one candidate over another, (b) oppose a candidate in some manner, or (c) have the effect of favoring a candidate or group of candidates, will constitute prohibited participation or intervention.”

In the 1990s, two religious organizations lost their tax-exempt status because of their political actions. Four days before the 1992 presidential election, The Church at Pierce Creek in Binghamton, New York took out an ad in two national newspapers urging Christians not to vote for Bill Clinton because of his positions on certain issues. This was the first time in IRS history where a bona fide church’s tax-exempt status was revoked because of its involvement in politics. Two days before the same election, Pat Robertson’s Christian Coalition distributed 40 million distinctly partisan “voter guides” by inserting them in the service bulletins of Christian churches nationwide. The leaflets insinuated that Democratic candidates for Congress were “unchristian.” This organization also lost its tax exemption.

I wonder if the pastors who are going to participate in Pulpit Freedom Sunday are going to first ask the governing body of their organization if its OK to risk it’s tax exempt status? Or will they simply ask for forgiveness after it’s too late?