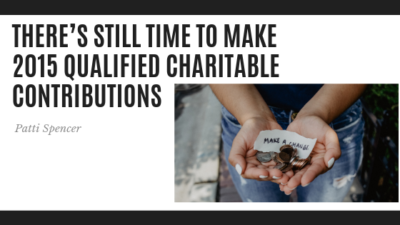 On Friday, December 18, 2015 President Obama signed the 2016 Consolidated Appropriations Act into law. Among its many provisions it is the permanent extension of the ability for a taxpayer to make qualified charitable distributions (QCDs) from individual retirement accounts (IRAs).

In the legislation signed by the President on December 18, 2015 the IRA charitable rollover law was made retroactive to January 1, 2015, and in the biggest news is that it was made permanent so it that it won’t expire at the end of 2016.

Some IRA owners made QCDs earlier this year, anticipating QCDs made on or after January 1, 2015 would be recognized for federal income tax purposes. Those folks can breathe a sigh of relief. If you were waiting for the law to be sure, you have a few more days until the end of the year to complete your QCD.

What is a Qualified Charitable Contribution?
An IRA owner who has reached the age of 70 or older can make a direct transfer of up to $100,000 per year from his or her IRA to an eligible charity, tax free. The amount directly transferred to the charity from an IRA is counted in determining whether the owner has met the required minimum distribution (RMD), but will not be considered a taxable withdrawal.

By replacing the RMD income and charitable contribution with a direct IRA to-charity rollover, the taxpayer can contribute to a favorite charity, and at the same time exclude the distribution from income and utilize the standard deduction to reduce their taxes.

In addition, a QCD can help a taxpayer avoid the 3.8% Obamacare surtax. Since the 3.8% surtax applies to the lesser of:

The IRA-to-charity QCD can be a true win-win. The taxpayer can reduce his or her income tax and the charity receives a much-needed contribution.