Issues of Diminished Capacity – Is it Time to Take Away the Car Keys? 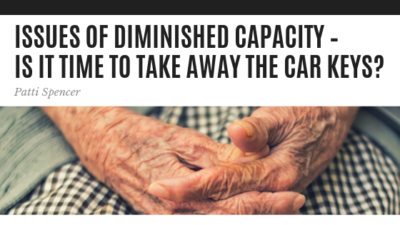 Maggie Kuhn started the Gray Panthers in 1970 as a response to her forced retirement at age 65. The mission of the Gray Panthers was to speak out against age discrimination, the Viet Nam war, and other political oppressions. There is no doubt that stereotyping due to age exists in contemporary society. The Gray Panthers call this kind of discrimination “ageism.” To be told “you’re too old” is as disheartening as to be told “you’re too young”; both statements make you a stereotype when in fact you are an individual.

No Bright Line Test
Obviously, mere chronological age does not give an answer to the question of whether or not a person is mentally or physically impaired. Just like medical diagnosis doesn’t give the complete answer of the ability to be in control of one’s own life. When and to what extent a person’s capacity to make decisions is diminished is a very difficult topic for lawyers, care-givers, and families.

The Right to Make Bad Decisions
How many of us know an older adult insisting on living alone at home when friends, family, and advisors think it’s a bad idea? Is the person incapable of making decisions or is it simply a decision that others do not agree with? Concern in a situation like this stems from the fear that the person may get hurt. For example, they will leave the stove on and burn the house down, they will fall down and not be able to get up or summon help, they won’t eat properly and can’t get around to doctor’s appointments and the grocery store. Is a person who chooses to live this way incompetent; or merely independent?

Different competency standards
This series of articles will look at some of the issues surrounding diminished capacity. The issues run from whether or not an older adult should continue to drive, to whether he or she can live alone at home, whether he or she can make a will, make gifts, and otherwise control finances, to whether or not a court-appointed guardian must be appointed. Often, a family’s first encounter with this question is whether or not the older adult should continue driving a car.

Driving Competency
Everyone knows Americans have a love affair with their cars. Do you remember the day you received your driver’s license? Learning to drive is a rite of passage. Driving a car for the first time gives a tremendous feeling of freedom, power, control, and independence. Getting behind the wheel of your first car is a day most of us will never forget.

Many adults are able to operate a car safely into their 80’s and beyond. Many will adjust their driving habits on their own when they realize they are having trouble seeing at night, or when they realize their response time or alertness has diminished. But, what about the driver who sees his license as his only way to freedom and independence and who will not give it up? That same sense of freedom and independence that teens acquire with their first license, seniors carry with them to old age.

The AARP gives this list of the top 10 signs that it’s time to talk about limiting driving or handing over the keys:

Improvement Before Decline
Drivers are not dangerous because they are getting older. In fact, older drivers are more likely to obey speed limits, wear seatbelts, and less likely to take risks and drive while under the influence of alcohol. However, when aging causes declines in motor skills, and in perceptual and cognitive abilities, this does result in poorer driving performance.

Medical Ethics
According to the American Medical Association, a physician has an ethical obligation to report unsafe drivers. If the driver poses a clear risk to himself and the community but refuses to give up the wheel, it’s the doctor’s ethical responsibility to notify the Department of Motor Vehicles. The AMA’s Older Drivers Project has created a Physician’s Guide to Assessing and Counseling Older Drivers.

Know Your Limitations
Be honest about your driving abilities. Regulate your driving yourself. Before deciding to stop driving all together, you may want to compensate for diminished driving skills: choose familiar or less challenging routes, avoid freeway driving, rush hours and congestion, driving at night, and making left turns. If you have a loved one who can’t or won’t drive safely or hang the keys – remember that your first care is the safety of that loved one and of others on the road.