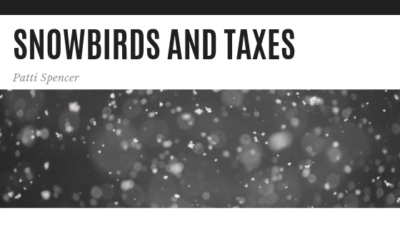 Where you live and where you are taxed.
Many folks like to spend the cold winter months in Florida, or some other warm state, and return to northern climates for the summer. Many of these folks think that their tax status is determined by the number of days spent in each location and claim residency in the state where they spent the most time. This is not so.

We need to define some terms to understand the correct answer: domicile, statutory resident, and resident and nonresident.

Domicile
Domicile is “the place where a man has his true, fixed and permanent home and principal establishment, to which whenever he is absent he has the intention of returning.” A person can have only one domicile at a time, no matter how many residences he owns.

Once a person acquires a domicile, he retains that domicile until another domicile is acquired. A change of domicile requires:

If a person moves to a new location but intends to stay there only a limited time (no matter how long), his domicile does not change.

Your state of domicile determines

Most states define domicile as the locality in which a person intends to make their fixed and permanent home. A person can only have one domicile at a time. Once a domicile is established, such location will continue to be his or her domicile until the person can show “with clear and convincing evidence” that they have changed their domicile to a new location.

The most significant challenge a person has in supporting a change in domicile is proving “intent.” For example, if a person sells his existing New York home (without replacing it with another home in New York) and purchases a home Florida, there should be little doubt that the person’s intention is to change his domicile to Florida. However, if the same person retains his New York home and purchases a home in Florida, determining the person’s intentions becomes much more difficult. Many states, including New York, look to five factors to determine a person’s intent when the person has multiple homes:

In addition to “intent,” there are other “points of evidence” states look to when determining if an individual has changed domicile, including:

Many tax advisors consider this type of evidence as “window dressing.” That is, just having this evidence, without the intent, will likely not reach the “clear and convincing evidence” standard held by most states. However, without obtaining the window dressing, a state will likely deny the change in domicile without looking at the person’s intent.

Statutory Resident
A person can change his or her domicile but still be taxed for income tax purposes as a resident if the state has a special law so providing. This is known as being a statutory resident. For example, under the law of New York State, a statutory resident is a person who is not domiciled in New York State, but maintains a “permanent place of abode” in the state, and who spends more than 183 days of the taxable year in the state.