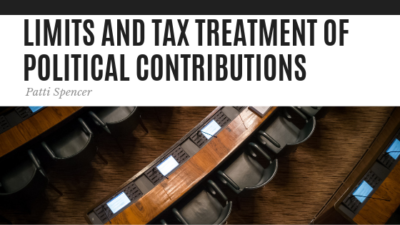 Are My Political Contributions Limited? Can I Deduct Them On My Taxes?

Campaigns and Parties. Contributions to political parties and campaigns, generally, must be disclosed to the Federal Election Commission (FEC) which publishes the information. Contribution amounts are often limited, and the contributions are not tax-deductible. For example, contributions by individuals of more than $200 in a year must be disclosed to the FEC within as few as 20 days. The FEC website then shows the donor’s name, address, occupation and amount given.

Social Welfare Non-profits. Another category of organizations who receive political contributions are social welfare non-profits. These organizations are governed by Internal Revenue Code Section 501(c) (4). That means they are allowed to lobby and may participate in campaigns and elections, but they can’t contribute to candidates.

Donations to (c) (4) groups by individuals aren’t tax-deductible and aren’t disclosed to the public, but gifts of $5,000 or more must be disclosed to the IRS. Some nonprofit experts are of the opinion that a contribution to a (c) (4) organization is subject to gift tax.

Trade Associations. Many trade groups engage in political activity. An example is the U.S. Chamber of Commerce which is qualified under Internal Revenue Section 501 (c) (6). Membership dues paid to these groups are deductible by individuals or businesses, but you only get a deduction for the non-political portion of the dues. By making contributions to these groups, you get some deduction on your taxes. Many trade groups also have PACs or super PACs.

The law said these groups may only make “independent expenditures” that aren’t coordinated with spending by a candidate or political party, and they can’t contribute to candidates.

Before Super PACs became “super,” they were just PACs. The groups could support a candidate or a cause but were heavily regulated under the terms of campaign finance law. Individuals were allowed to give $2,500 — no more — and corporations and unions were strictly forbidden from making donations.
That changed with two court cases in 2010. In SpeechNow.org v. Federal Election Commission, a federal court found restrictions on individual contributions to independent organizations that seek to influence elections to be unconstitutional. In Citizens United v. Federal Election Commission, the U.S. Supreme Court held that limits on corporate and union spending to influence elections were also unconstitutional.

Citizens United made it legal for corporations and unions to spend from their general treasuries to finance independent expenditures but did not alter the prohibition on direct corporate or union contributions to federal campaigns; those are still prohibited. Such organizations seeking to contribute to federal candidate campaigns must still rely on traditional PACs for that purpose. However, they may spend money independently of campaigns without forming a PAC.

A Super PAC can directly attack a political candidate. However, the Super PAC may not coordinate directly with candidates or political parties. A Super PAC has to disclose the identity of its donors. It may accept unlimited amounts of money from individuals, unions or corporations, and their spending isn’t restricted. As a practical matter it may be difficult to determine who donors really are since contributions can be made through a company or the contributions can be given to a social welfare nonprofit (which is not required to report identities) which in turn gives the money to the Super Pac.
Contributions to Super PACs are not tax deductible.

Public charities can take part in a limited amount of lobbying. Lobbying is when an individual or group communicate with an elected official to advocate for or against a particular legislative measure. The IRS establishes guidelines on how much time and money organizations can spend on lobbying without violating their tax-exempt status.

You can’t make a tax-deductible donation to a candidate or campaign, but you can make a deductible contribution to a 501 (c) (3) organization that can lobby candidates about issues you care about. What’s more, not every communication between an organization and an official is considered lobbying. Organizations are allowed to communicate with officials to ask them to make an issue a priority and educate the official about an issue they might not be familiar with or aware of.

Presidential Election Campaign Fund. You can direct $3 of your income tax to the Presidential Election Campaign Fund. Simply check the box “yes.” Contributing $3 to this fund does not increase your taxes due or reduce the amount of any refund to which you may be entitled. The national parties use money from the fund to offset the costs of their national conventions. Minor political parties are eligible for campaign funds if they receive at least 5 percent of the popular vote in the general election.