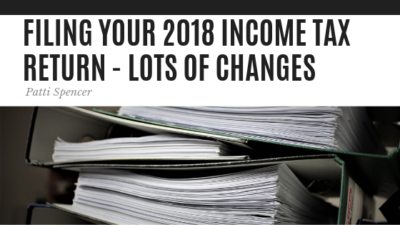 If you haven’t already, it’s time to file your 2018 income tax return, but be prepared, there are lots of changes this tax season. The Tax Cuts and Jobs Act became law on December 22, 2018.  Listed below are the major changes that will affect your individual tax return.

IRS Forms 1040, 1040A and 1040EZ have been combined into one simplified individual tax return. The new design consists of a two-sided, half-page form. Some sections from the previous design were moved to supporting schedules.

This credit remains unchanged. This can be up to $1,050 for one child under 13 or $2,100 for two children. $5,000 of income can still be sheltered in a dependent care flexible savings account.

The deduction for state and local taxes is capped at $10,000.

The deduction limit has been raised from 50% of adjusted gross income to 60%. Donations made to a college for the right to purchase athletic tickets are no longer deductible.

For income earned from sole proprietorships, LLCs, partnerships and S corporation, there is a new deduction. Taxpayers with pass-through income will be able to deduct 20% of their pass-through income. If your small business generates $100,000 in profits in 2019, you will only pay tax on $80,000.

There are phase-out limits for professional service business owners like lawyers, doctors and consultants. Limits are $157,500 for single filers and $315,000 for married filing joint return.

These Deductions Have Been Eliminated

While efforts were unsuccessful to repeal the Affordable Care Act, known as Obamacare, the tax bill did repeal the individual mandate.  That means people who don’t buy health insurance will no longer have to pay a tax penalty. Note that this change doesn’t go into effect until 2019 so it still applies to your 2018 return.

Contribution limits for IRAs are unchanged at $5,500 (plus a $1,000 catch-up contribution if you are 50 or older). If a retirement plan is available to the taxpayer through his employment, the $5,500 deduction for IRA contributions for single taxpayers phases out with Modified Adjusted Gross Income (MAGI) beginning at $63,000, fully phased out at $73,000. The deduction phases out for married filing jointly taxpayers between $101,000 and $121,000

The deduction limit for Roth IRAS for single taxpayers is unlimited with Modified Adjusted Gross Income (MAGI) up to $120,000 but the deduction phases out as it approaches $135,000. For married filing jointly the phaseout range is $189,000 to $199,000.