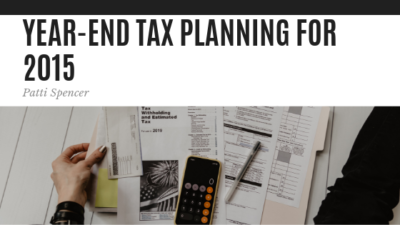 There is still­ some time left to make some income tax savings moves for 2015.

Charitable Contributions
Make deductible charitable contributions on or before December 31. Taxpayers must be itemizing deductions on IRS Schedule A in order to benefit. Be sure to obtain acknowledgment letters for donations greater than $250. Cancelled checks are insufficient to support a deduction for a gift greater than $250.

Harvest Losses
Do you have capital gains, sell investments such as stocks and mutual funds that have losses? If so, you can offset the gains by the losses. If you have more losses than gains, $3,000 in losses can be offset against ordinary income and the excess losses over $3,000 can be carried over to next year, and the year after that as long as you live.

If you’re self-employed, consider a Keogh plan. The plan must be established by December 31, 2015, but you have until April 15, 2016 (plus extensions) to make contributions.

Check Your Flexible Spending Accounts
Flexible spending accounts, also called flex plans, are fringe benefits which many companies offer that let employees put of their pay into a special account which can then be used to pay child care or medical bills. The advantage is that money that goes into the account avoids both income tax and Social Security taxes. The catch is that the “use it or lose it” rule applies. If you don’t use everything in the plan by the end of the year, you forfeit the excess.

Check to see if your employer has adopted a grace period permitted by the IRS, allowing employees to spend 2015 set-aside money as late as March 15, 2016. If not, make a last-minute trip to the drug store, dentist or optometrist to use up the funds in your account.

Consider Tax-favored Education Savings.
If you’re eligible, for 2015 you can contribute up to $2,000 to a Coverdell account on behalf of a child. Contributions grow tax-free and qualified K-12 and higher-education-related withdrawals are tax-free. You have until next April 15 to contribute for income-tax purposes, but if you make the contribution by December 31, it will count as a gift for this year instead of next year for gift-tax purposes.

Anyone, regardless of income, can contribute up to $70,000 ($140,000 for a married couple) to a 529 plan without incurring gift taxes by electing to have the gift spread evenly over five years. You don’t have to invest in your own state’s plan, and it’s a good idea to compare state plans especially if you live in a state with no deduction (such as California) or one with no state income tax.

Consider a Qualified Charitable Distribution from your IRA.
This benefit expired at the end of 2014. It allows individuals age 70 or older to contribute up to $100,000 directly to a qualified charity and exclude it from income. The excluded amount can satisfy the required minimum distributions for the owner and can keep taxpayers from losing the benefit of deductions and other tax benefits by keeping gross income lower.

Congress typically waits until mid or late December to pass legislation permitting these distributions. In 2014, they didn’t approve it until December 23, giving taxpayers just 6 business days to complete the transaction. No word yet about this year, but it could happen. Procrastinate on taking your minimum distribution if you want to wait this one out.