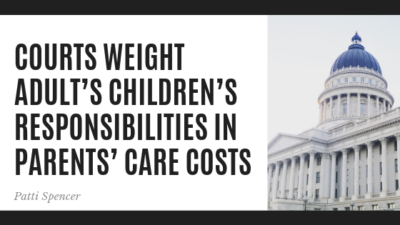 Can an Adult Child be Held Responsible for a Parent’s Nursing Home Costs?

On May 7, 2012 the Pennsylvania Superior Court issued an opinion in the case of Healthcare Retirement Corporation of America v. Pittas. The court found a son liable for his mother’s $93,000 nursing home bill under Pennsylvania’s Filial Responsibility Law. This high-profile case raises concerns.

Currently, 30 states have laws making adult children responsible for their parents if their parents can’t afford to pay for their own care. They have rarely been enforced. Since it has become more difficult to qualify for Medicaid and have long-term care costs paid under that program, it looks like nursing homes are going to start enforcing the filial responsibility law to get paid.

Filial responsibility is the personal obligation or duty that adult children have for protecting, caring for, and supporting their aging parents. In  England, the Elizabethan Act of 1601 for the Relief of the Poor,  provided that “[The father and grandfather, and the mother and  grandmother, and the children of every poor, old, blind, lame and  incompetent person, or other poor person not able to work, being of a  sufficient ability, shall, at their own charges, relieve and maintain  every such poor person.” These Elizabethan “poor laws” became the model for the United States’ legislation on the same subject.

An example of its enforcement is the 1994 Pennsylvania Superior Court case, Savoy v. Savoy which involved an elderly parent whose reasonable care and maintenance expenses exceeded her monthly Social Security income. The Superior Court found that she was indigent and affirmed the lower court’s order directing her son to pay $125 per month directly to her medical care providers.

The nursing home sued Mr. Pittas for $93,000 under Pennsylvania’s Filial Responsibility Law, which requires a child to provide support for an indigent parent. The Lehigh  County trial court ruled in favor of the nursing home, and Mr. Pittas appealed. Mr. Pittas argued, in part, that the court should have considered alternate forms of payment, such as Medicaid or going after his mother’s husband and her two other adult children.

A  three-judge panel of the Pennsylvania Superior Court agreed with the trial court that Mr. Pittas is liable for his mother’s nursing home debt. The court held that the law does not require it to consider other sources of income or to wait until Mrs. Pittas’ Medicaid claim is resolved. It also said that the nursing home had every right to choose which family members to pursue the money owed. The case is now the subject of an en banc reconsideration petition filed with the  Pennsylvania Superior Court.

According to elder law expert  Professor Katherine Pearson, in the last 30 years, there have only been 3  cases discussing the Filial Support Law. What makes this case unique in  Pennsylvania, said Pearson, is that “it is the first time substantial dollars have been awarded against an adult son to support his mother who is in a nursing home – almost $93,000. It’s a game-changer in terms of  the dollars and cents that we are talking about in terms of filial  support.”

If a parent enters a nursing home with insufficient funds to pay for his or her care, adult children should be vigilant about potential claims against their own assets to pay for that care. Remember, the statute goes both ways, it can also apply to a parent who has an adult child who is indigent. There have been numerous attempts in the Pennsylvania legislature to amend or repeal the Filial Support Law.  Contact your representative and/or state senator if you are concerned about the Filial Support Law currently being enforced in Pennsylvania.